As I Remember It: Not Milking Cows

We always had one or two cows to be milked twice a day, every day, 7 days a week, 365 days a year with the cats always getting their portion, both air-borne and in the pan.

I never milked a cow.  Even though I often begged my brother to teach me to milk the cows, he never did; and by the time he realized he was passing up an opportunity to have his own Milkmaid-in-Training, I had realized maybe I didn’t want to learn to milk cows.

I would hang around the barn while he was milking, petting the cats and squishing spiders~~or dodging them.  Those huge barn spiders were a special kind 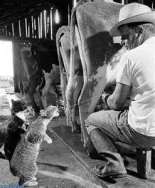 I would gladly assist as The Cow Tail Holder to prevent it from swishing him in the face.  That hurt, because the very end of the tail where there were just a very few hard long tail hairs could almost cut the flesh as it swiped an eye or part of the face.

This entry was posted in As I Remember It, Larsen Family, The Farm. Bookmark the permalink.
%d bloggers like this: