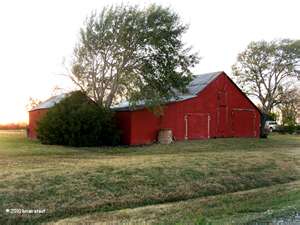 Making something for our mothers for Mother’s Day was a rite of spring in the classrooms of the 1950s.

I hated it because I wasn’t good with dainty things and had no patience for tiny handwork.  The worst of all was in third grade when each girl in the class was given a square piece of linen to be handstitched around the edge with tiny stitches to create “a lovely handkerchief.”

The second worst was the year we were driven through the process of creating hand-twisted paper flowers: white lilies with green sprout-leaves along the side.  Mine were all grubby because we often worked on them right after recess.   Farm girls made use of

recess; we did not stand around displaying new socks or shoes or dresses, so recess remainders were transferred from my hands to the paper flowers as I worked hard on them, and when I gave them to Mom the Friday before Mother’s Day, the corners of her mouth twitched a bit.

I knew she had seen right away how smudged they were, but she suppressed the urge to laugh and just said quietly, “How about if we put them in the china closet?”  They sure looked nice laying there…safely behind the pretty glass where folks who might come for coffee could see but not touch.

Another rite of spring on the high prairie was a game of marbles played with nearly frozen fingers as we knelt on icy ground, the cold seeping through our jeans-knees, shooting the the marble with stiff thumbs, trying to get around the 4 holes arranged in a square so that we could earn our trip to the Poison Pot in the middle and then take off across that little landscape, going after our playmates’ marbles.  The phrase “have you lost your marbles?” 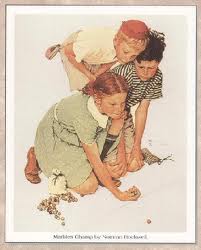 was a straightforward inquiry if spoken by youngsters during chilly April days, windy May days and perhaps into June.  By the time June arrived, our insistence on playing marbles every day in those horrible conditions would be judged to have adequately proclaimed, “SPRING!!“~~and then the marbles would disappear for the summer months.

In the midst of marble season we celebrated The Blooming of the Crocuses.  The prairie crocus has proven its toughness beyond all doubt: the corms are firmly concealed under pitiless prairie sod just as they have been for centuries.  The Crocus certainly does not”bloom in a garden” in Montana.  It blooms on

the crest of windswept hills where cattle graze and coyotes howl in the moonlight as they re-establish their summer territory.

If you’re a child of the prairie, you surely know that the crocuses will bloom and you know where to look for that soft, uncertain purple haze that sweeps across the rise.  On a chilly day that still calls for double jackets and  a headscarf tied tightly under a girl’s chin, after checking to be sure that the cattle are in the far pasture you take off for that steep hill about a half mile from the farmyard. Gotta see if The Crocuses are blooming.   They almost never are on the first trip out, because the first trip is usually the product of the hyperactive, hurry-up imagination of a child who is heartily tired of winter and knows that the next best thing that is going to happen is The Blooming of The Crocuses.

Even though the flowers aren’t open yet, the child of the prairie knows where to find the 200 square foot patch where the soft, fuzzy-stalked, toughest-of-little-flowers make their home.  So you bend over and inspect the ground.  Ah, there.  There it is.  The little rolled up stalk is pushing its way up through the tight gramma grass that isn’t worth a plugged nickel for grazing, but it’s all we have.  And thus we take home the good report: “Th’ crocuses are coming up!!”

A week later, the first lavendar to purple handful makes its debut on the supper table, perched in a glass of water right between the gravy and the chicken.  Everything seems just a bit more right with the world once the first crocus bunch is on the table.  In the 2-3 crocus patches we had across our 700 acres of pasture, there will be thousands of flowers

for a couple of weeks, so the Official Crocus Distribution now gets under way. All of the women in the community know who has crocus patches and who doesn’t; who’s well enough to get out there to pick them and who’s not.

A batch are taken to town for Grandpa and Grandma.  Another bunch goes with the girls to school in a jam jar to sit on the teacher’s desk.  (The boys wouldn’t be caught dead carrying crocuses, but they’ll be sure the country girls get inside the grade school ok with their precious cargo.)  No one minded if there were three jam jars with crocuses lined up on the teacher’s desk.  It was just that much prettier.  Teacher would never have combined them into one rude bunch.  No.  Each one is displayed individually in its jam jar, just as it was presented.

Some sunny afternoon another bunch (perhaps along with a pint of sweet, thick cream from our own fine cows) goes to one of the elderly widows as we “visit Mrs. Olson for coffee.”  This requires a clean cotton skirt and a clean blouse for the young lady, and

nylons and dress-up shoes for the mother along with a big batch of crocuses to do for the old lady’s kitchen what other crocuses had already done for ours.   I might sit at the kitchen table with the ladies to have lemonade or cookies, or I might get sent outside with my cookies while they visit.   If Mrs. Olson has a cat, I’ll sit out on the front step playing with the cat until it’s time to go home.

My mother eventually became that elderly widow, like Mrs. Olson was in the 1950’s, and 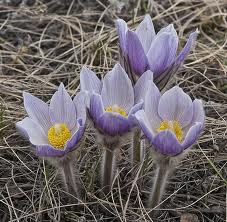 by 1995 was in a nursing home suffering from dementia.  Several of the immediate family traveled long distance for her birthday in mid-April.  The nursing home was located in the town where four of her well-loved sisters lived, about 40 miles from the old farm and its pastures. When I saw a 90 minute window before supper on the day of her birthday,  it occurred to me that Mom really should have some crocuses.  Crocuses had often been  a pretty part of her birthday and now that she was 90, it was a simple thing, was it not, for her daughter to drive to the farm and bring some crocuses for her bedside table?  No.  Actually, it wasn’t so simple.

Road construction was already under way, so not only did I have 40×2 miles of narrow two-lane road to navigate….it would have to be done with interruptions and

slowdowns…. over the rolling prairie farmland, across the Missouri River, through our small hometown, 3 miles east on the state highway, then 3 miles on the curved scoria road to get to the most dependable crocus patch and (all dressed up) climb through the tightly strung barbed wire fence, which really wasn’t that much of a problem since I had learned proper and ladylike Barbed-Wire Fence Passage just like every other self-respecting farm girl.

I knew exactly how far it was to that patch and how much time I had, so a little math defined the plan:  the round trip is 80 miles and I need 10 minutes for picking crocuses and getting them back through the fence wrapped in the wet paper towels stuffed in styrofoam cups from the nursing home in lieu of dependable jam jars.  A sustained/average speed of 60 mph and 10 minutes for crocus-picking uses the entire 90 minutes.  So, rough estimate~~probably need to do 80 at every opportunity, so that I can slam down to 45 when necessary.  That should do it.  It did.  It was an intense 90 minutes, but I made it.

Now I was  past age 50 by this time, but there was still something of “a little girl bringing flowers for Mama’s birthday” in the situation.  I walk in the front door of the nursing home

and, realizing that she may have forgotten that I was in town during the 90 minutes I was gone,  I remind myself to watch her face as I come through the door of her room to quickly discern if she still recognizes me and, if she doesn’t, to help her remember.  My older sister and her husband are waiting in the room, knowing that I’m planning to be back for supper.  Down the hall, around the corner, and through the door–right flat on time.

Got ‘er done, I did.  This time, however, unlike the day I presented the grubby lilies for Mother’s Day,  she looked at the gift I was bringing and absolutely lost it.  She began laughing hysterically, pointing helplessly at me and my flowers (ok, so they were a bit the worse for wear and were still sort of in their wet paper towels) because she couldn’t talk.  All she finally got out past her laughter was “Look at you and those flowers!  They’re smushed!”

And then a not-funny, but funny thing happened:  just like a little girl, I had to fight back tears as my heart was silently pleading, “But

Mom…I drove so fast…in such a little time….I wanted to bring you flowers for your birthday…. you’re so frail…..sometimes you don’t know me any more and today you did~~but tomorrow you’ll forget I was here…..I wanted to bring you crocuses, Mom, because I love you, and I’m sorry you’re so frail…..please don’t laugh at me, Mom.  I  remembered how you loved them…so I brought you crocuses from the pasture.”

She laughed until her tears ran down her face, and she didn’t notice that I was resisting my own.  It was only later that I realized she had given me a great gift as I stood there with my smushed crocuses. The shades of dementia had stolen casual laughter from her life,  but on that day, in those bittersweet moments, I once again heard her laugh~~really laugh.

Then, as I realized the gift, I thought of the crocuses she had picked over 90 years~~first in her youth with childish fingers that were now gnarled and useless from arthritis; then as a bride, putting something pretty on the table for her husband of just a few weeks after their marriage in 1926; then as a young mother, showing the children how to pick them; then picking them alone more often as the children grew up and left home….and now sitting in a wheelchair with a mind that no longer worked clearly, but laughing in sheer joy because the eyes still worked well enough to see that the youngest daughter has come through once again~~at the last minute~~with a typically bruised offering,  just in time for Mom’s birthday.

She remembered me all right.

She remembered our crocuses.

All of our crocuses.

I still remember her great laughter that day.

And I remember our crocuses.

All of our crocuses.

This entry was posted in Heritage, Mailboxes and Old Barns Essays. Bookmark the permalink.

4 Responses to Remembering When Crocuses Bloomed