As I Remember It: From Butter to Oleo

Around 1951, the farmers’ kitchens which had been producing the sweetest table-ready butter this side of heaven for a couple of hundred years and the farmers’ wives who were in charge of those kitchens were somehow persuaded that “there is something better than butter.” Allowing butter to be supposedly bettered was a clanging gong in our subculture, which even boasted a butter-based-tongue-twister presented from time to time by Dad:

And now there’s a brave new product being thrust down the marketing channels of the day called Oleo.  Oleo?  What, exactly, is that? Then the explanation came: “It’s Oleomargarine.”  Ah! Now we’re getting somewhere. Called “Oleo” for short.

The Collaborative International Dictionary of English provides this:

see margarin.] 1. A processed food product used as an inexpensive substitute for butter, made primarily from refined vegetable oils, sometimes including animal fats, and churned with skim milk to form a semisolid emulsion; also called oleomargarine; artificial butter. [Webster 1913 Suppl. +PJC] The word margarine shall mean all substances, whether compounds or otherwise, prepared in imitation of butter, and whether mixed with butter or not. –Margarine Act, 1887 (50 & 51 Vict. c. 29).

Note: Oleomargarine was wrongly so named, as it contains no margarin proper, but olein, palmitin, and stearin, a mixture of palmitin and stearin having formerly been called margarin by mistake. [1913 Webster]

So Webster’s says it wasn’t even “margarin.”  It certainly wasn’t better than butter.  It wasn’t just like butter.  It  wasn’t “an alternative butter.” [There’s no doubt it was substituted for butter, but that had nothing whatever to do with butter somehow having been found wanting.] 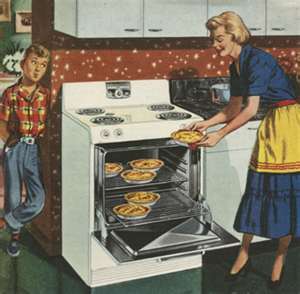 the band for 40-50 years, and were now told that Home-Churned Butter From a Hand-Milked Cow on Home-Baked Bread was second best. That was the required exchange if they wanted to keep up with the times and send the faithful churns (even the spanking new electric ones) to the back cupboard in the basement.

The ladies tried, but Oleo as first marketed in the 1950s had a problem.  It was a disgusting color of sort-of-white which was a useful negative for those connected to the dairy industry as explained in Wikipedia:

“Margarine naturally appears white, or almost white, and by forbidding the addition of artificial coloring agents, legislators in some jurisdictions found that they could protect their dairy industries by discouraging the consumption of margarine. Bans on adding color became commonplace in the U.S., Australasia and Canada and, in some cases, those bans endured for almost 100 years. It did not become legal to sell colored margarine in Australia, for example, until the 1960s.”  [I think the Australians were on to something.]

The appearance of Oleo was nothing like the rich yellow that God included gratis in the finished product when home-churned cream became butter,  not to mention the magnificent byproduct of buttermilk thrown in for nothing.  That disgusting Oleo color had to be fixed in order to complete The Conversion of The Farmers’ Wives.

Oleo was sold in rectangular plastic bags that were quite firm, sealed all around, about 3″ X 7″ or so.  Perhaps a pound of Oleo was machine-sealed inside the bag. On one side of the bag, visible through the plastic,  an orange dot of dye was sitting there on the surface of the Much-Better-Than-Home-Churned-Butter-OLEO waiting to be worked into the ugly sort-of-white stuff.

The Oleo-kneader must take the bag firmly in both hands, and then~~as though you are kneading bread dough~~you work it back and forth, back and forth, squish-squish, spreading the silly orange dye-dot throughout the Oleo until it “looks like butter.”  That’s easy enough unless the bag breaks open in your hands, but eventually it is mixed and now it’s right.

Now it’s just the same as the Sweetest Table-Ready Butter This Side Of Heaven Made From Thick Cream From The Family Cow.  Right?

A man convinced against his will is of the same opinion still.

Eventually that truism worked itself out in the kitchens of these farm wives as they aged into their 60s and their 70s.  Many of them no longer had the cow, the cream separator or the churn, but they retook the high ground as they began buying butter at the store and relegated Oleomargarine to the background.

This entry was posted in As I Remember It. Bookmark the permalink.