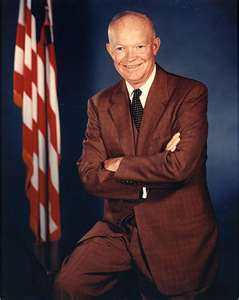 May Day: Eisenhower, Khrushchev and the U-2 Affair (Michael Beschloss, Harper and Row, 1986) is a review of the international context and disastrous events of the U-2 loss over the Soviet Union just two weeks before a summit meeting scheduled in Paris in May of 1960.  The Cold War was well under way when that May Day flight took place: at the time, the Soviets suggested that the timing of the overflight

was chosen for its particular insult.

Far into the book there is a summary of some of Eisen- hower’s thoughts about defense spending.  “He believed that the high taxes and deficits required [by an endless arms race] would sap productivity, fuel inflation and ruin the American system: ‘Any person who doesn’t clearly understand that national security and national solvency are mutually dependent and that permanent maintenance of a crushing weight of military power would eventually produce dictatorship should not be entrusted with any kind of responsibility in our country.’ ”

A little later in this discussion, Beschloss quotes Eisenhower as saying, “God help the nation when it has a President who doesn’t know as much about the military as I do.” Ike’s concern was not what we might think it was.  Beschloss goes on to explain that “the President believed that the greatest threat to national security was being frightened into an eternal arms race that would induce wild inflation and ultimate national bankruptcy.”

This book is a good read for the historical narrative and for seeing a bit of the rationale that drove national security issues in the post World War II/Cold War world, and realizing how drastically that rationale has been changed.

Even knowing that government of those years had its scoundrels, I find the contrast between the thought and experience found in the political-military-industrial movers and shakers, circa 1960, and what constitutes 2011 processes to be seriously unsettling.

Gallery | This entry was posted in Books, History, Quotes. Bookmark the permalink.