Dad with his horses in the early 1920s

My brother wrote this monograph about the family horses, including some more personal memories. Much of what he describes was well before my time, literally, as he was seventeen years old when I was born.

Dad farmed with horses through 1934 before he bought his first tractor.  We had 12-15 head of draft horses when on Grandpa Soren’s place.   Pulling a duckfoot or the disc required eight horses; a two bottom plow, seed drill or binder used four and a cultivator or mower required a team of two horses.

teams were replaced with fresh horses at noon.  The horses were rubbed down before harnessing and after removing the harness they were again rubbed and curried.

After moving to the Jorgenson place in late 1934 and having sold the heavy horses, Dad bought a team of light weight horses from Bud S who lived down near Lanark.  Swindle broke these horses, named Pete and Tony, with a whip.  The effect of such treatment would be with us as long as those horses lived.  They were skittish, unstable, easily frightened and they did not trust anyone.  Mother was afraid to have us kids near them.  We were scared of them.

We used this team to haul water three miles [from the community well] to our home cistern, to pick corn, to haul rocks, mow, rake and haul hay.  I also used them as a bundle team on one of the last field threshing machine operations in the area when I hauled bundles for Pete H over near McCabe in 1944.  Dad had a rubber-tired wagon made from an old Ford vehicle frame.  It was easy to pull and was used to pick corn, haul fence posts and to go fencing on the range land.

My memories of Pete and Tony started in about 1937 when a man drove in to the yard to see Dad just as he finished unhooking them from the wagon.  Dad, apparently wanting to show the visitor what a brilliant horse handler this 10 year old of his was, said to me, “Calvin, put the horses in the barn.”  I took the reins he handed me and drove the team down to the south side of the barn.  I had not ever separated the team before, and was I scared of them! So being basically crafty, I thought, “Well, I’ll just slide the barn door open and drive them into their stall.”

It had not yet dawned on me that when the team was hitched up, Pete was on the right and Tony on the left, but in their stall inside the barn, they stood just the opposite.  There, Pete was on the left and Tony on the right.  As soon as they entered the door, still being harnessed together, they both tried to get on the opposite side of the other.  Their harness was well torn up before they could displace enough of it to get into their own stalls.  Exciting afternoon. 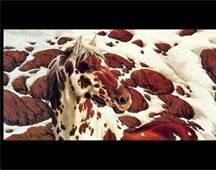 A couple of years later, I had become quite the teamster as I was hauling manure out to the field north of the house on the stone boat.  Unloaded and empty, I started the team back over the frozen clumps of soil and straw.  I thought—why not ride?—so I jumped on the stone boat, promptly slipping on the manure and ice and winding up on my butt on the stone boat.  The extra noise and sudden movement scared the horses and off they went at a gallop.  I was bounced off in short order.

The horses continued east at a full gallop with the stone boat banging and flying behind them.  They went through the first three wire fences with no problem.  They  then headed north and went through the second fence on Hofman’s.  Here they took about 1/8 mile of posts and barbed wire with them as they moved on.  Soon they were on Hofman’s frozen slough and then both horses were down on the ice all missed up in the barbed wire and what was left of their harness.

A couple of years later I broke Pete to ride.  I was gentle with him and he was a good range riding horse.  I tried breaking Tony to ride over at Fred F’s.  I saddled him and got on as Fred held him snubbed up close to his horse.  Tony just quivered for about five seconds, then exploded straight up.  He was flipped over by the snub, down he went with my left leg under him.  I wound up with a very stiff and swollen leg.  I did not try riding Tony again.

By 1943-44 Did had bought a good saddle horse, called Jim, from Holger for $25.  I had a big nicely marked sorrel.  As soon as we got home from high school in the spring, it was saddle up and ride the coulees looking for cows having trouble giving birth.  On one occasion we came across a cow with only the head of her dead calf protruding from her birth canal.  The objective was to get the dead calf out and save the cow.  Roping the calf’s neck with his lariat, running it to his saddle horn, Dick moved his horse easily.  The calf would not come instead  the cow was being dragged by his horse.  I then roped the front legs of the cow to my saddle horn with my lariat.  We each then pulled our end of the cow in opposite directions with our horses.  When the calf finally came out of that poor cow, his neck was over two feet long.  The cow lived—saved by Dane Valley cowboys.

The last horse described—Jim—is the first and only horse I remember being acquainted with as a child.

I didn’t know anything about Pete and Tony—but Jim was frightening enough to me.

I frantically climbed the corral fence and perched between the corral and the pigpen, until I calmed down enough to think to crawl across all the connected corral fencing to an area where I could climb down near the potato patch, and “out of” the corral area.

Unless such frights involved broken bones, they weren’t mentioned to anyone since it was obviously our own carelessness that created the situation to begin with. If we were alone when the scary event took place, we were just glad we hadn’t gotten hurt and–that being the case–we didn’t have to tell on ourselves.

A couple of days ago, my husband and I made yet another visit to Champoeg (pronounced Shampoo-ey) State Park which is the site of Oregon’s Statehood Vote back in 1859.  Among the features at this wonderful park are the huge black cottonwood trees which surround the clearing where the vote took place.  Nearer the Visitor Center is a large 1860s pioneer garden and, beyond that, a restored barn from the same era.

The wood floor in the barn is worn to a silky shine. There are huge benches made from rough tree trunks both inside and outside the barn, which is sometimes now used for old-fashioned barn dances with live fiddle music.

I have a rule that I have exercised all of my life: wherever we are, if it’s a place that fills our hearts and “fills up our senses” and if no one else is there–at that moment, it’s ours. That was our barn the other day.

No one was in sight in either the garden or the barn for the entire thirty minutes we sat there and just soaked it in.  The clean straw smell of that barn was precisely the same as that provided in our barn in Montana when Pete and Tony and Jim were there.

This entry was posted in Mailboxes and Old Barns Essays, Uncategorized. Bookmark the permalink.