We Went to Yellowstone Park in 1949

At about 7:08 in the video, there’s a beautiful view of the Grand Canyon of the Yellowstone, with the usual view of Yellowstone Falls.

Our parents drove the family there in the old car.

It was a trip of over 500 miles. Preparations included a basket full of packed sandwiches and thermoses full of coffee. It involved sleeping in the car sandwich-like, the six of us sort of packed next to one another.

The narrator in the satirical video above, does have a properly ominous voice. The information he provides is quite accurate but apparently he just doesn’t know how to enjoy Yellowstone. (Maybe he’s from New Yawk ‘r somethin’…secretly, he loves it….which comes out as he goes along….)

We enjoyed it every time we went, including the several trips in our adult years when we introduced our boys to the marvels to be found there. In 1949 we,  like most farm kids raised around DDT, rusty nails, and literal raging bulls, did as we were told and if we were little, a parent was clutching our little hand in a death grip so we were quite safe.

Gas was about 20 cents a gallon in those days and bread ran about 14 cents a loaf. Household income averaged a little over $3,000.

I was five, my closest brother was seven, older brother and sister were fourteen and fifteen.

That must have been the first time I saw, in person, Gil’s Got It, a packed-to-the-rafters-souvenir store in Livingston, Montana which had as many road signs in those parts as Burma Shave had across the west.

We were accustomed to spotting the Burma Shave signs ahead of time and chanting out the rhymes as they went by, 1-2-3-4 and # 5 always simply proclaiming BURMA SHAVE!

Some of them were driving reminders:

Pull off the road

To change a flat

No spare for that!

Many just pushed the product:

Those two are selected from the 1949 rhymes. Complete lists are available covering the years from 1927 to 1963 at

The Gil’s Got It! signs were not like that – there was no information given other than the exclamatory declaration – Gil’s Got It! and in small letters at the bottom – Livingston, Montana. So tourists from around the region driving their old sedans on the two lane highways for hundreds of miles (most of them with children in the back seat) pulled into Livingston to find out exactly what it was that Gil’s had. If they traveled like we did, many of them also spent an hour or so at the city park to have their lunch from their big picnic basket and let the children run around.

Gil’s had colorful, child-sized, feathered Indian headdresses that would provide hours of entertainment, postcards of every kind (many of them feature the information Gil’s Got It!) and a thousand other items, stacked to the ceiling, that were rarely needed but very often purchased, just so the buyer would have something from Gil’s Got It!

As we took many long distance car trips over that decade (to New York, California, Iowa), it became obvious that most regions had some claim to fame in their region. We would see the over-sized roadside signs warning Only 50 Miles to the Alligators! and then – “only 25 miles!” and the countdown continued until there was a giant sign, sometimes built right over the little gas station and store, with a arrow pointing downward,  Alligators Here!

Our feeling at that point was sort of like when we had finally arrived at Gil’s Got It! (which actually was the name of the store). And we just drive by the poor alligators, knowing it was not a good day in alligator-world.

Bear in mind that we never drove anywhere near the south, where alligators might feel at home or actually be at home.

A highlight of my memories from our trip to Yellowstone Park – well – there were two: we saw and were endlessly fascinated by Old Faithful and, secondly, we got caught in a rainstorm while we were walking amongst the hot mud pools and had to run for the car – me in my crocheted dress.

My crocheted dresses (with matching satin underslip in coordinated colors, beautifully setting off the endless links and holes of the crochet) were part of ordinary dress for this child in those days. During long Montana winters Mom had made about ten of them for me in a variety of sizes. They were familiar wardrobe during my toddler and preschool years.

I was actually wearing a turquoise crocheted dress and matching slip that day. After we were all damply tucked back in the car and drying off a bit – my teenage siblings teased me because “the rain got in the holes of your dress, Sharon!”

I didn’t know what to make of that. Didn’t seem that I was any wetter than they were.

I still have several of those dresses hanging here and there in my home. Perhaps little Miss Abigail Torgerson, newest great-granddaughter who arrives in August, can wear one in a few years. 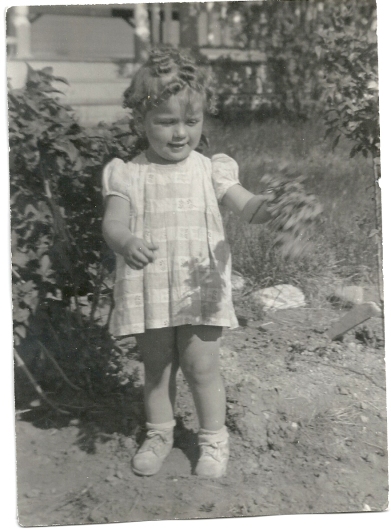 A picture of me at about three or four (not wearing one of the crocheted dresses). Apparently the little metal curlers were just removed from my hair which was not yet combed out.

This entry was posted in As I Remember It, Larsen Family, Travel. Bookmark the permalink.