Immanuel Larsen was born in Nebraska in 1897 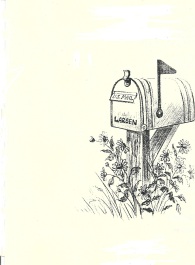 In May of 2010, Grant and I were preparing for a nine-state road trip which would take us south from Minnesota on I-29 to Omaha; west across Nebraska on I-80, with a planned historical/family heritage stop in Aurora, NB, for a full day; and then on to Denver where we would attend our grandson’s high school graduation.

Then we would head north into Wyoming and west to Oregon to visit our other son and his family, finally returning to Minnesota via Idaho, Montana, and North Dakota. A long trip!

We had reservations at a B & B in Aurora, Nebraska, and planned to spend a day and a half there exploring some Larsen family roots.

A couple of days before we were to leave a big tree fell, destroying our garage and woodshed in addition to other things in its trajectory. Our departure was delayed and as a result we only had three hours in Aurora for the intended heritage search. But it was still such a rich find!

We left Aurora satisfied and excited – with terrific documentation, information and photos, and a large book of newspaper article replications from 1874-1902.

Aurora is the Hamilton County seat and was the site of Soren and Frederikke’s Larsen’s first home in America after their arrival from Denmark in 1894.

Aurora is about sixty miles west of Lincoln and about four miles off the interstate.

Hampton, our Dad’s birthplace in 1897, is about six miles northeast of Aurora. Marquette, birthplace of Uncle Willie in 1895 (according to brother Calvin’s interview with Willie) is about six miles straight north of Aurora. Uncle Eddie was born in that area in 1902. I don’t have birthplace information for one of their two sisters, Lillie.  Soren and Frederikke became American citizens on September 21, 1906, at the Hamilton County Court House in Aurora. They left for Montana in 1908.

The Plainsman Museum in Aurora is a wonderful resource for pioneer history. I had had email contact with Gary Gustafson, the museum’s Assistant Director, prior to our arrival and had done research online to have a sense of where to look for family records and sites.

Mr. Gustafson was on duty when we arrived at midmorning on a Saturday. He was the quintessential museum person and appears to have dust drifting off his clothing as he squints through his glasses, slowly straightening up from a table that is spread deep with old manuscripts. He was almost as a big a find as the museum itself.

He pulled out the original Minister’s Book from the Immanuel Danish Evangelical Lutheran Church, Hamilton County, NB, for the dates of 1874-1917, and gave me copies of the pages listing our Dad’s family statistics, and included a copy of the title page of the book.

I had noticed in some of our narrative records that Dad’s birthplace is sometimes referenced as Hampton, and occasionally as Hamilton. After I realized that Hamilton was the name of the county, I assumed that there was just some confusion because of the similarity of the names and then learned that was not necessarily the case.

Mr. Gustafson said that, in addition to the County of Hamilton, there actually was a fledgling village named Hamilton. That village was right on the edge of the already larger town of Aurora and did not survive, but the name and the location appear in different documents, sometimes in an overlapping fashion.

Mr. Gustafson did some initial and quick visual searches on landowner records while we visited. He said that any of our family would be most welcome to contact him with further questions via email. Renters (which would include Grandpa Soren) would sometimes be shown on tax and ownership records – as renters – so that it is sometimes possible to document exactly where individuals lived even if they didn’t own land.

The museum has fairly complete original records of all the newspapers of those days, none of which have been transferred to microfiche or scanned to computers. So reading and enjoying those would be a labor intensive project for another day.

We wanted to locate the country church Grandpa and Grandma attended during the early years, which is also the location of the grave site of Immanuel’s baby sister (our aunt) who died on January 11, 1903.

Prior to our arrival Mr. Gustafson had located a brief newspaper article regarding her death, published on January 16, 1903 in the Aurora Republican. The burial was in what is now called The United Cemetery, about three miles north of Hampton. Those Nebraska roads had familiar and very long views clear to the horizon, like those around our Montana farm.

Because of location grids I had downloaded on the internet earlier, along with the information received from Mr. Gustafson, we  were able to walk right to the grave site of Ethel Mathilda Larsen who was born on December 25, 1902 and died on January 11, 1903.

After a little work with a pencil eraser end, scrubbing off the lichen on the granite, the letters of the inscription were plainly visible although appropriately worn after 107 years.

The little headstone probably weighed less than fifteen pounds and was only about twelve inches high, sitting loosely on a base with a slightly larger footprint. It was very strange to realize that I could have actually picked it up in my hands and walked away with it. Very strange. Makes me think about those generations of Nebraska teenagers who left that little stone right where it was.

The church building is still intact, but was moved into Grand Island to the grounds of Stuhr Museum of the Prairie Pioneer in 1965.

My brother’s transcribed interview(s) with Grandpa Soren (done in the 1950s), indicated that when Grandpa and Grandma and the family relocated to Roosevelt County, Montana (Culbertson) in 1908, they had traveled by railroad in the emigrant car.

I was very curious – what railroad? All of our growing up years in the 1940s-1950s in eastern Montana, we were only familiar with the east-rail lines. The Great Northern (out of Minneapolis-St. Paul) was the major one. Settling the west was the focus in the early years.

Mr. Gustafson directed me to old railroad company charts from the late 1800’s which show many small company lines linking their way hither and yon through western and northern Nebraska, making connections to/through Rapid City, and north from there. 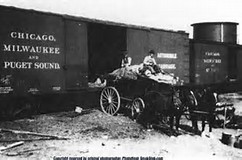 I didn’t have time to pursue details beyond his good help, but perhaps they eventually had the emigrant car transferred to the Great Northern line at Williston and came in from east at that point.

In any event, going by rail from Nebraska to Montana did not require coming from Minneapolis or Fargo. There were apparently lines all over the place, which would would have been mostly defunct by the mid-20th century or earlier.

The book we purchased was The Way Was Long by Denny Enderle & Diann Jensen.

The following link provides background for Grandpa Soren’s years in Nebraska and adds context to the years in the Hampton area:

This entry was posted in Denmark, Larsen Family, Travel. Bookmark the permalink.

2 Responses to Immanuel Larsen was born in Nebraska in 1897